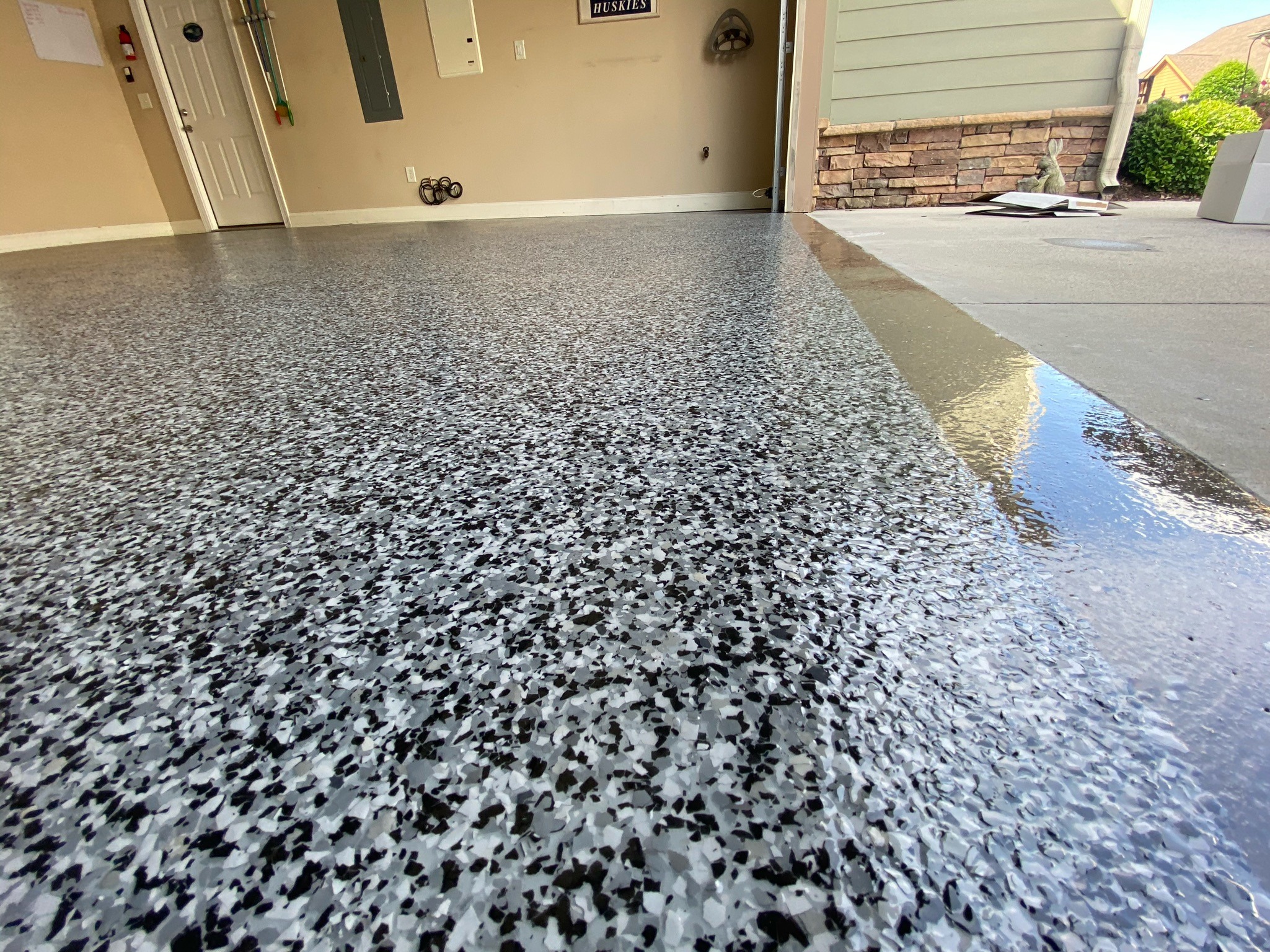 Aren’t you satisfied with how your garage floors look? Your garage, being one of your home’s most heavily used areas, requires flooring that can withstand high loads and constant foot activity while also being durable enough to withstand outside temperature fluctuations.

You can achieve world-class durability and designer style with SSP Coatings’ unique garage floor coatings! Our epoxy floor solutions are suitable for a wide range of applications, including residential garage floor coating systems and the most demanding industrial space. We’re delighted to provide the best garage floor coatings in Chattanooga and North Georgia, as well as skilled installations and exceptional customer service. Give your garage’s concrete floor the attention it so rightfully deserves. SSP Coatings in East Brainerd can help you right now!

Epoxy garage flooring is popular among homeowners and business owners because of its simplicity of installation and robustness. Epoxy flooring is ideal for surfaces like a garage, basement, or patio that must endure high temperatures, chemicals, oil, and other liquids. Epoxy does not have seams, joints, or ridges like tile or different flooring since poured. This makes epoxy a more hygienic flooring choice, as dirt and germs can’t hide in gaps and crevices during cleaning. Unlike wood, laminate, and other forms of flooring, epoxy does not warp or discolor when exposed to water.

At SSP Coatings, we match superior installations with competent and experienced professionals giving them the expertise to lay out a beautiful floor. Furthermore, our customer-focused technicians treat your house the way they want theirs treated. Don’t settle for a floor that you’ll have to refinish several times. Call our experts at SSP Coating to have your epoxy coating done the first time correctly!

Got Garage Envy? Brighten Up Your Garage

There’s still time to improve the look of your garage. However, be certain that you’ll choose what is appropriate for your style and budget. You want excellent care and exact application when you’re searching for a high-quality, long-lasting, and easy-to-maintain epoxy floor coating. Indeed, many garage flooring companies are out there, but none of them compare to the excellent durability, design, and value that our unique materials provide.

We are enthusiastic about our work at SSP Coatings, and we provide solutions with excellent finishes and results. If you’re searching for high-quality epoxy flooring solutions for home or commercial projects in East Brainerd, we’re your best choice. Guaranteed bespoke designs, unrivaled craftsmanship, and excellent finishing at the lowest pricing!

We are Servicing in East Brainerd

SSP Coating is the only concrete coating business growing faster, servicing more clients, and earning more accolades. In East Brainerd, we are your one-stop shop for all your epoxy flooring requirements! Thousands of people have trusted us to enhance their homes and companies, and now it’s your turn!

We have the experience and knowledge to make your East Brainerd project a success. If you’re interested in transforming your garage floor with epoxy garage floor coating in East Brainerd, request a quote today or reach out to our team at SSP Coating, and we’ll give you a firm estimate that includes our lifetime satisfaction guarantee! For more information, schedule a garage appointment now and get the best deal in East Brainerd and surrounding areas.

ABOUT THE CITY OF EAST BRAINERD

East Brainerd is an unincorporated community in Hamilton County, Tennessee, and is located about 18 miles east of Chattanooga. East Brainerd is adjacent to Apison, Collegedale, Ooltewah, Tyner, and the Tennessee-Georgia border. In the 2000 census, the population was 14,132 people. However, it was not registered in the 2010 census. The Chattanooga, TN–GA Metropolitan Statistical Area includes it.

Initially, the community was called Concord. That name lasted until its main road changed from Bird’s Mill to East Brainerd following Sunnyside, Dutchtown, and Belvoir into Brainerd. Bird’s Mill Road started life as Mission Road, from the outskirts of Chattanooga to Brainerd Mission and then beyond, changing its name when Philemon Bird purchased the mission property from Thomas Crutchfield in 1852.

About 50 years ago, the area that is now known as East Brainerd mainly was farmland. People moving to East Brainerd have helped it grow into a popular Chattanooga suburb with an excellent commercial presence. East Brainerd is known for being home to one of the largest Scottish-Irish ancestries per capita among all American neighborhoods. And whether you have this specific ancestral background or not, East Brainerd is a great place to live.